Poe was released after signing a two-year, $8.5 million contract with the Cowboys during the offseason, but when asked about if it had to do with him being the only player to kneel during the national anthem, Jones shut that idea down.

COWBOYS’ OWNER JERRY JONES LOSES HIS TEMPER DURING INTERVIEW: ‘SHUT UP AND LET ME ANSWER’

“When you’re 30 pounds overweight and you’re not doing anything about what’s keeping you from performing well on the field, there is no reason to get into the other stuff,” Jones told ESPN.

“I understand your question, and I’m deliberately not going to answer it,” Jones said of the kneeling question. 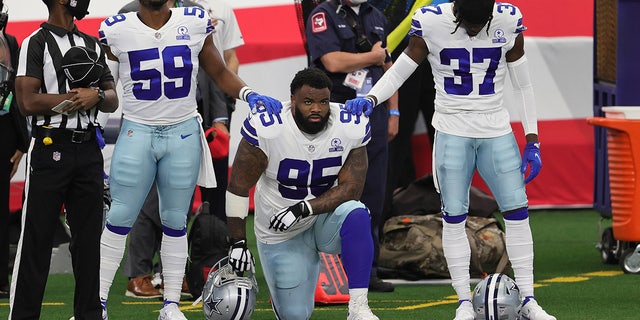 Dallas Cowboys defensive tackle Dontari Poe (95) kneels during the national anthem prior to the game against the Atlanta Falcons at AT&amp;T Stadium. (Matthew Emmons-USA TODAY Sports)

“We have a platform here, but the platform on the football field has a high standard, and [Poe] was not up to the standard. He needed to correct that, and he did not. I’m going to leave it at that.”

CLICK HERE TO GET MORE SPORTS COVERAGE ON FOXNEWS.COM

Poe played for the Kansas City Chiefs and the Carolina Panthers before joining Dallas. In all seven games played this year, Poe had only totaled seven tackles and zero sacks.